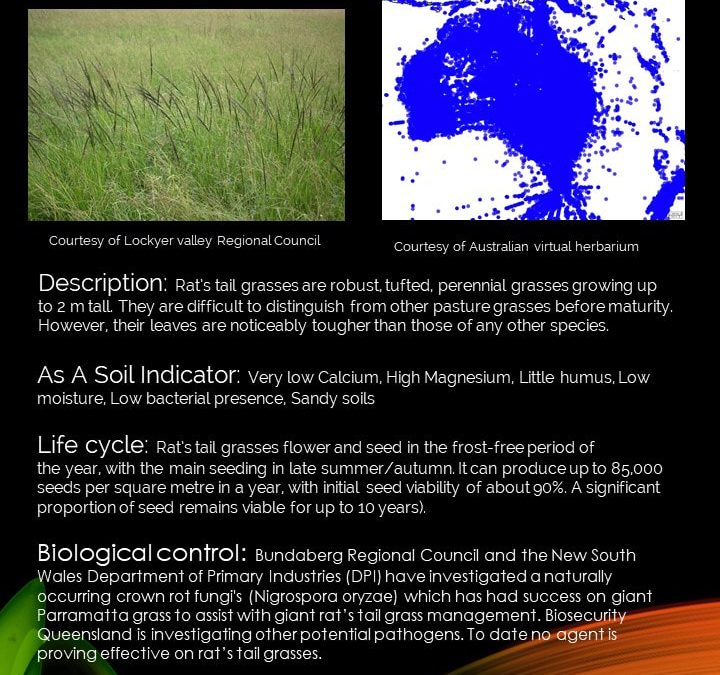 Description:
Rat’s tail grasses are robust, tufted, perennial grasses growing up to 2 m tall. They are difficult to distinguish from other pasture grasses before maturity. However, their leaves are noticeably tougher than those of any other species.
As A Soil Indicator:
Very low Calcium, High Magnesium, Little humus, Low moisture, Low bacterial presence, Sandy soils
Life cycle:
Rat’s tail grasses flower and seed in the frost-free period of
the year, with the main seeding in late summer/autumn. It can produce up to 85,000 seeds per square metre in a year, with initial seed viability of about 90%. A significant proportion of seed remains viable for up to 10 years).
Biological control:
Bundaberg Regional Council and the New South Wales Department of Primary Industries (DPI) have investigated a naturally occurring crown rot fungi’s (Nigrospora oryzae) which has had success on giant Parramatta grass to assist with giant rat’s tail grass management. Biosecurity Queensland is investigating other potential pathogens. To date no agent is proving effective on rat’s tail grasses.
Physical control:
For small infestations, hand-chip, bag and remove tufts then burn them.
Detrimental:
Quickly dominates pastures, particularly after overgrazing or soil disturbance. Causes losses in carrying capacity and decreases production by up to 80%. Loosens teeth of cattle and horses that graze on it. 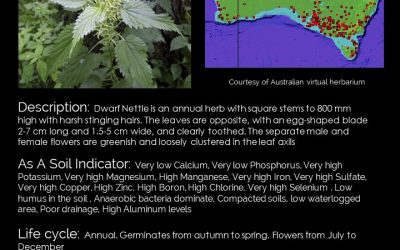 Description:Dwarf Nettle is an annual herb with square stems to 800 mm high with harsh stinging hairs. The leaves are opposite, with an egg-shaped...

END_OF_DOCUMENT_TOKEN_TO_BE_REPLACED

Description:A many branched annual to perennial shrub or small tree to 3 metres tall with stalked, large leaves with 5-9 finger like lobes and...